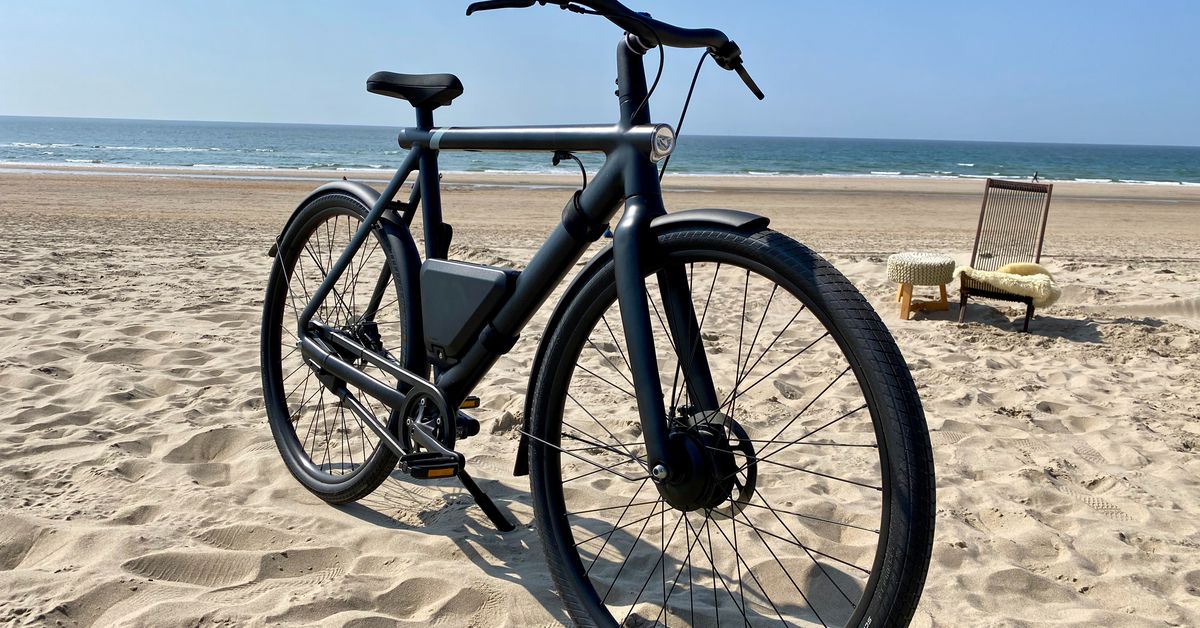 VanMoof PowerBank is a range extender and problem solver

VanMoof, maker of some of our favorite pedal electric bikes, just announced the PowerBank, a range extender that also charges the internal battery of the company’s S3 and X3 models. Not only does the Emotional Support Battery promise to ease range anxiety by extending the daily trips of VanMoof e-bikes from 45 to 100 km (28 to 62 miles), but it also addresses VanMoof’s biggest limitation: Non-removable batteries that allow for a sleek look, but might require carrying the 19 kg (42 lb) bikes inside to be recharged.

I’ve had a new VanMoof S3, upgraded for 2021 (more on that later), with the PowerBank since Friday. After 3 hours in the saddle over two 90-minute trips, I can attest to the extended range and more convenient charging. It’s not cheap and it’s not perfect and I haven’t gone as far as VanMoof claims, but the PowerBank is a compelling case to buy.

The PowerBank is in a permanent holder that you must first attach to the S3 or X3 e-bikes. The PowerBank battery then wedges into the frame and locks into place with a key provided, and is further secured with two Velcro straps. A third velcro strap is used to prevent the charging cable from tipping over as it winds its way to the underside of the top tube and into the charging port of the bike. I drove on rather bumpy brick roads and didn’t hear a single noise from the assembly.

The thick velcro straps, while being unattractive, blend well into the dark black S3 model. But the straps and the bulky battery are visually shocking on the smaller light blue X3 electric bike. The PowerBank is not compatible with older VanMoof electric bikes like the S2 or X2.

Although this is a first for VanMoof, range extenders are not uncommon among e-bike manufacturers, especially for e-mountain bikes. Last month, Specialized announced the Como SL commuter electric bike with an optional $ 449.99 range extender that it says adds around 31 miles (55 km) of range.

Over the weekend I tested a PowerBank mounted on a brand new VanMoof S3 on a 76.7 km (47.7 mile) round trip from Amsterdam to the coastal hamlet of Castricum aan Zee, and back. That’s beyond the stated range of 60 km of a fully-mounted VanMoof, and well beyond the 47 km that I passed in my S3 range test in April 2020. VanMoof claims that A fully charged S3 battery paired with a PowerBank has a range of 105 to 250 km (65 to 155 miles), depending on the level of power assistance you use. I was not close to it.

Extended my range by about 70 percent

I rode at full power (level 4) over extremely flat Dutch terrain generously using the Turbo Boost button. A little more than half of my tests took place directly in a fairly strong headwind of 14 knots, the rest benefited from a tailwind of 6 knots. In total, I would estimate that I could have traveled about 80 km (50 miles) before the S3 and PowerBank batteries ran out. In other words, the VanMoof PowerBank paired with the new S3 extended my range by around 70% compared to the 47 km (29.2 miles) I had driven last year.

In my testing, I noticed that the S3’s battery drained faster than the PowerBank could recharge while driving at full power with multiple presses of the Turbo Boost button. (VanMoof confirmed this behavior after my testing was complete.) So rather than risk having to stop and charge on the way home (or ride in less fun economy mode), I took advantage of a wait for 20 minutes by ferry to top up the S3 Battery when it only showed 15% remaining range. I probably would have done the last 7.9 miles home even without the charge, but the point of having a PowerBank is to avoid range anxiety and I was in a rush to get back.

As for my butt, well, I should give VanMoof’s custom saddle an honorable mention. It’s surprisingly comfortable, and the first time I rode it my S3 review bike came with a different saddle last year. While I noticed a little discomfort the low getting on the bike for my return trip was a lot less than expected.

Despite my test below the lowest range estimate for the PowerBank, VanMoof is sticking to its numbers. “This should give most riders an additional 45 to 100 km of range depending on the conditions and the individual’s level of use,” the company said in an email response to my findings. Apparently my aggressive riding style, weight (190 pounds / 86 kg), height (6 feet / 183 cm) and the ambient conditions during testing make me an outlier.

VanMoof e-bikes do not provide a USB charging port for handlebar mounted phones and the arrival of PowerBank does not change that. It is an oversight in my opinion. A range extender allows riders to cover longer distances, which often requires GPS navigation on a phone running at full brightness and paired with a Bluetooth headset for step-by-step directions and maybe music playing over your connection. 4G / 5G. My three-year-old iPhone was not up to par, which meant tying it to another battery that I had to carry in my jacket. I forgot the cable when I pulled up at a ferry crossing which almost knocked me over.

VanMoof says a USB port was considered, but was eventually dropped for “waterproofing reasons.” Shame.

The best VanMoof e-bikes yet

I should also note that the S3 I tested was one of the models that recently added support for Apple’s Find My tracking network. Although this is the main topic, VanMoof’s X3 and S3 e-bikes have also been upgraded with improved displays on the bike that are more visible in direct sunlight and more precise electronic shifters. I complained about the readability of the display in my review last year and it has improved slightly. More importantly, the electronic shifter seems much improved over the S3 variant that I reviewed when launching in April 2020. At the time, I said it was having issues on 2 out of 100 changes. , but the four speed automatic transmission on my new S3 had issues. 1 in 100+ shifts during my three hours of driving. I characterize a glitch as an unexpected mechanical “clink” sound, a surprise freewheel from the pedals when you expect to feel resistance or an obvious sensation of being in the wrong gear.

VanMoof, unlike many e-bike manufacturers, is able to constantly improve the hardware and software of its e-bikes because it has a dedicated factory and relatively tight control over a parts supply chain. Custom VanMoof. That means it doesn’t have to compete for Shimano shifters or Bosch motors, for example, which have left many bike makers without parts for months after the recent surge in demand for e-bikes. Good thing too. Early deliveries of S3 and X3 models were hampered by emission rates of up to 10 percent, the company’s co-founders told me last year.

VanMoof claims to have also improved the internal wiring of its bikes for better weather resistance, added new pedals for better grip and new fender flaps to reduce excessive splashing on wet roads. It has also made the shipping boxes more environmentally friendly, which is important considering that VanMoof ships around 12,000 of these giant boxes per month, as of September 2020.

All that to say that the 2021 S3 and X3 models, the ones with the “Locate with Apple Find My” label printed under the top tube, are the best VanMoof e-bikes yet, which really does mean something. The new PowerBank option is just the icing on the cake.

All photos by Thomas Ricker / The Verge, unless otherwise noted