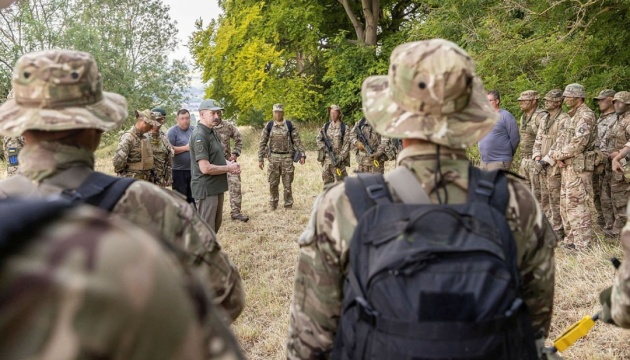 Ukrainian sailors trained in Britain to operate mine countermeasures vessels

A relevant statement was posted by the General Staff of the Armed Forces of Ukraine on Facebook.

“The Deputy Minister of Defense of Ukraine, Mr. Volodymyr Havrylov and the Minister of Armed Forces, MP James Heappey, met Ukrainian sailors trained by the Royal Navy and visited the infantry training by the British Army,” Britain’s Ministry of Defense said. and Northern Ireland informs.

As noted, the visit allowed the Ukrainian Deputy Minister of Defense to observe the training in progress while subsequently having the opportunity to interact with the Ukrainian trainees. 5 The Rifles CO Lieutenant Colonel Jim Hadfield OBE gave a presentation on the progress of the training, with input from his training staff, and shared some of his thoughts on the operation so far from the perspective of 5 RIFLES

UK Armed Forces Minister James Heappey said: “The intensity with which Ukrainian soldiers and sailors are training is something to behold. They work with an emphasis on troops that know they will fight in a war. Delivering training that matches this intensity and focus isn’t easy. The Royal Navy and British Army work long hours and draw on all of their operational experience to ensure that their new Ukrainian friends are sent into battle with the best chance of victory.

Havrylov thanked the British side for their help and noted that the brotherhood of Ukrainian and British soldiers working together to achieve a common goal is the key to strengthening the combat capabilities of the Ukrainian army.

The Royal Navy has been training full crews of Ukrainian sailors since May this year, teaching them to operate the Sandown-class mine countermeasures vessels (MCMVs).

Ukrainian troops have undergone initial courses at training establishments in a range of specialties, including SONAR operation, engineering, damage control and navigation. This is followed by a period of knowledge exchange alongside Royal Navy crews and operational training at sea.

As noted, the UK has offered to train up to 10,000 Ukrainian soldiers in battlefield skills to help them stand against Russian troops.

The program is part of the UK’s enduring commitment to supporting Ukraine in its fight against the unprovoked invasion from Russia, which so far amounts to more than £2.3bn of military aid and includes more than 5,000 NLAW anti-tank weapons and M270 multiple launch rocket systems.

Around 1,050 UK service personnel are deployed to deliver the programme, which will take place at MOD sites in the North West, South West and South East of the UK. Each course will last several weeks and will be led by elements of the 11th Security Force Assistance Brigade.

The British government quickly purchased AK variant assault rifles for the training program, meaning Ukrainian soldiers can practice the weapons they will use on the front line.

The UK has also donated clothing and equipment to support Ukrainian soldiers in their training and deployment to Ukraine.

The UK has a long history of supporting Ukrainian military personnel through Operation Orbital which trained 22,000 Ukrainians between 2015 and 2022. The new program will build on this success and demonstrate the UK’s continued leadership in responding Ukraine’s military needs as the war progresses.

Photo credit: General Staff of the Armed Forces of Ukraine