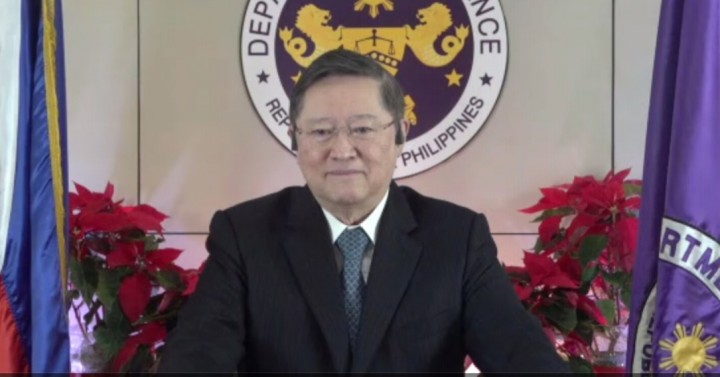 MANILA – Finance Secretary Carlos Dominguez III assured President Rodrigo Duterte that the impact of the current Russian-Ukrainian crisis on the Philippines will only be temporary, and a comprehensive package of measures is being implemented to mitigate its impact on the economy and the population.

Dominguez said that despite the negative repercussions of the crisis in the form of higher energy and food prices, he is confident that the government will be able to keep inflation within the target range of 2 to 4% and to achieve its objective of expanding the economy between 7 and 9% this year.

“I want to emphasize that we do not expect this crisis to last very long. However, there may be lingering effects. We have seen similar crises in the past, such as the Gulf War in 1990, the oil price shock of 2008, and also the first Russian-Ukrainian conflict in 2014, and we have weathered all of these crises very well.” , said Dominguez. during the president’s televised meeting with Cabinet officials on Monday evening.

Duterte called the meeting to discuss with his economic officials government measures put in place to control the effects of rising commodity prices, such as providing subsidies to affected sectors.

He said the Asian financial crisis of 1997 and the global financial shock of 2008 had even more severe, direct and long-lasting effects on the economy, but the Philippines overcame its challenges.

“Based on these experiences, we are confident that we have the tools and the preparation to help our people through this crisis,” said Dominguez, who leads the president’s economic team.

He said the Russian-Ukrainian conflict would not directly affect the national economy, as neither country is a major trading partner of the Philippines.

“Instead, the Philippine economy will likely be collateral damage; it is as if we were hit by a ricocheting bullet,” he added.

Dominguez said these “indirect shocks” will likely be felt through four main channels: the commodity market, the financial market, investments, and its impact on the country’s fiscal health.

As the conflict continues, Ukraine and Russia’s main trading partners – primarily the European Union (EU) – will seek to trade with other countries such as the United States (US) and Russia. China, which in turn will push prices up. of raw materials in these markets as well.

The conflict will also likely lead to a spike in interest rates or the cost of borrowing, which was already expected to rise even before the crisis due to the US Federal Reserve’s monetary policy tightening, he said.

“The conflict will increase the perception of risk in investments,” he added, which could make investors more conservative, or decide to postpone their planned investments due to global uncertainties triggered by the crisis.

“Once the sanctions are imposed, it will take a long time for investor and consumer confidence to return to normal,” Dominguez said.

As for the impact on the country’s fiscal health, Dominguez said the government support needed to protect vulnerable citizens and critical sectors most affected by the crisis will further stretch state finances.

He said the measures outlined by Secretary Karl Kendrick Chua of the National Economic Development Authority (NEDA) to deal with these potential shocks will help insulate Filipinos from the adverse effects of the crisis.

“With the measures Secretary Chua has outlined, we are confident that we will be able to keep inflation within our target range of 2-4% and maintain our growth trajectory of 7-9% this year,” he said. said Dominguez.

Among the measures presented by Chua is the need to move the entire country to Alert Level I and the opening of all schools to in-person classes to increase national economic activity and offset external risks.

He also cited the need to increase the amount of fuel subsidies for the public transport sector and agricultural producers; the expansion of the oil buffer stock; the continuation of the promotional discount on fuel granted by the oil companies; promotion of energy conservation; suspension or removal of transfer fees imposed by local government units (LGUs) and other entities on truckers; the establishment of service contracts on all public transport lines; and promoting the use of electronic vehicles and the use of active transportation (eg bicycles) among measures to mitigate the impact of rising oil prices.

Citing proposals from the Cabinet’s Economic Development Group (EDC), Chua also recommended increasing the buffer stock of liquefied petroleum gas (LPG) from seven to 15 days; increase the supply and reduce the price of coal by reducing the 7% most favored nation (MFN) tariff rate to zero until December 2022; and maintain the carbon buffer stock at the current minimum level of 30 days.

To mitigate the impact on electricity consumers, Chua said EDC has offered to promote energy conservation measures, including the use of technology for energy saving; stagger the increase in power generation load; and allowing foreign ownership of micro-grids and solar, wind and other renewable energy sources.

In the agriculture sector, Chua said EDC has recommended the implementation of the second phase of the “Plant, Plant, Plant” program subject to the availability of funds; and providing targeted fertilizer vouchers to farmers, and expanding supply through bilateral discussions with fertilizer-producing countries.

Other EDC recommendations include:

· The Department of Agriculture (DA) to closely monitor rice inflation, and the National Food Authority (NFA) to closely monitor the buffer stock;
Assist LGUs in increasing the buffer stock of rice with concessional loans from the Land Bank of the Philippines (LandBank) and the Development Bank of the Philippines (DBP), especially for the acquisition of post-harvest facilities and warehouses;
· Accelerate the implementation of the Rice Competitiveness Enhancement Fund (RCEF) and other elements of the national rice production program to increase local production;
· Facilitate the ongoing clearance of sanitary and phytosanitary (SPS) import permits for rice, especially for shipments arriving for the lean season from July;
· Increase the supply and reduce the price of rice by extending the MFN tariff rate of 35% until December 2022;
Increase the supply and reduce the price of maize by lowering the MFN tariff to 5% in-quota and 15% out-of-quota with a minimum access volume (MAV) of 4 million metric tons until December 2022;
· Import more fodder wheat and produce more cassava (as a food substitute);
Expand supply and reduce pork prices by extending the reduced tariff of 15% on-quota and 25% off-quota with a MAV of 200,000 metric tons (MT) until December 2022;
· Accelerate the release of imported pork from cold storage;
· Pass the Livestock and Dairy Products Bill;
· Remove all non-tariff barriers for pork and fish;
Issue Import Necessity Certificate (CNI) for small pelagic fish (e.g. galunggong) valid from Q2 to Q4 of 2022. Supply needs additional 140,000 metric tons (MT) to fill the projected supply shortfall of 200,000 MT;
Accelerate the release of SPS clearances for chicken from National Meat Inspection Service (NMIS) cold stores to bring stocks back to pre-pandemic levels;
· Address the Temporary Prohibition Order (TRO) on sugar imports;
· Allow direct import by industrial users: implement a 1:1 ratio between the domestic market and imports;
· Develop sources of wheat (eg India);
· Support the Department of Trade and Industry’s (DTI) Mass-Based Tasty Pinoy Project in partnership with the private sector, which provides bread at a lower price;
Promote wheat-free flour substitutes such as Sagip-Nutri flour (made from cassava, sweet potato, monggo, etc.) and banana flour; and
· Reiterate the inclusion of renewable energies (RE) and agriculture in the draft Strategic Priority Investment Plan (SIPP). (NAP)