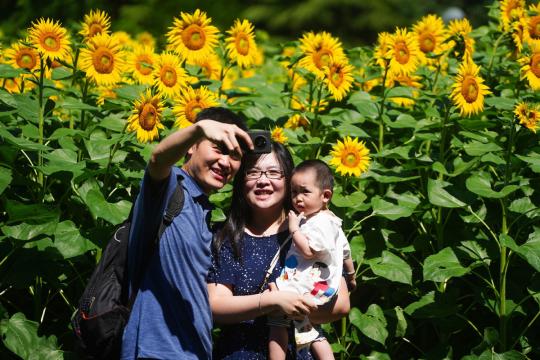 Governments are introducing a range of measures to support childcare


A family takes photos against the background of blooming sunflowers at the Olympic Forest Park in Beijing on July 4, 2021. （Photo/Xinhua）

Wang Yuxiao was eager to open the tax app on her phone and add details about her three sons.

She happily shared the experience on her WeChat Moments, saying “A fly’s legs are also meat,” a Chinese saying that means “every little bit counts.”

Through a personal income tax application provided by the state tax office, parents can claim additional deductions if their children are in school or under age 3.

The Government Work Report 2022, released on March 5, announced that for the first time childcare costs for children under 3 will be included in the special additional deductions for personal income tax.

Multiple support measures have been rolled out in various provinces and cities after the announcement in May of the third-child policy, which allows all couples to have up to three children. Since the most important factors for many mothers are time and money, the measures revolve around these elements.

In addition to tax reductions, some cities offer subsidies for families with several children.

Panzhihua, Sichuan Province, was the first to announce such a measure, offering 500 yuan ($79) per baby per month to families with two or three children up to age 3.

In September, Linze County, Gansu Province, announced that the second child in a family was entitled to a childcare subsidy of 5,000 yuan a year until the age of 3, while the figure for the third child was 10,000 yuan. When the birth allowance of thousands is added, a family with three children can apply for a maximum of 100,000 yuan.

In October, Beijing’s Chaoyang District said families with more than one child will be able to shorten the queue while waiting for public rental apartments, setting an example of a local government housing policy. aimed at easing the burden of babies.

In March last year, the 14th five-year plan (2021-25) mentioned exploring the possibility of granting parental leave, and the 30th session of the Standing Committee of the 13th National People’s Congress in August amended the law. on population and family planning and encouraged governments to introduce leave for parents.

For families with children under the age of 3, provinces such as Guizhou, Sichuan, Anhui and Fujian, as well as the Ningxia Hui Autonomous Region, grant both parents 10 days of parental leave per year. In September, Changyuan in Henan Province announced that both parents would be entitled to a maximum of 30 days off per year.

In Guangdong province, mothers of three children are entitled to 80 days of additional leave, while their spouse can benefit from 15 days.