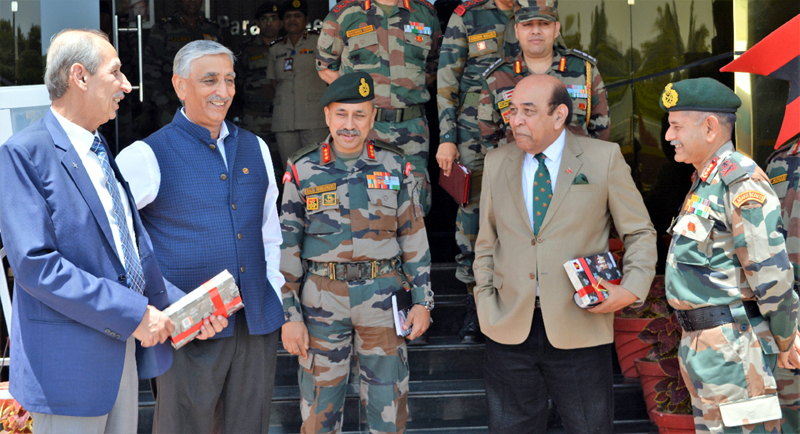 JAMMU, June 3: The Army’s Northern Command, headquartered in Udhampur, held a three-day brainstorming ‘Strategic Conclave’ which discussed measures to deal with growing challenges as the head of the Command, Lt. Gen. Upendra Dwivedi pointed out that the “grey zone war” is going on in J&K and Ladakh by expelling the space between peace and war, also called “no war, no peace” , and military commanders must discern threats through thinly veiled indicators.
The conclave lasted three days from June 1 to 3.
At this unique event, experts from the field of defence, strategic studies and national studies shared their views on the salient aspects of “grey zone warfare” and its manifestations which have a direct impact and link with a myriad of war levels.
Eminent speakers who participated in the event included three former army commanders, Lt. Gen. Praveen Bakshi, Lt. Gen. DS Hooda, Lt. Gen. Anil Chauhan, three former corps commanders, Lt. Gen. SA Hasnain, Lt. Gen. SL Narsimhan, Lt. Gen. Savneet Singh in addition to writers and senior scholars Nitin Gokhale, Jaydev Ranade, Claude Arpi and Vijay Gokhale (former Foreign Minister) and serving senior officers.
The Northern Command faces the unique challenge of “two and a half fronts” with the live phenomenon of gray area warfare.
While the recently concluded ‘North Tech Symposium’ aimed to integrate niche technology into the armed forces under the rule of ‘Raksha Atmanirbharta’, the strategic conclave worked to strengthen the culture of strategic thinking and develop understanding of the joint “response mechanism” in the diplomatic, informational, military and economic (DIME) spheres through these deliberations.
Northern Command’s effort remains to forge a force capable of solving the “grey zone conundrum” and its relationship to different levels of warfare. Gray area warfare will manifest in a range of activities that have traditionally been considered beyond the scope of military actions, but armed forces must respond with a clear eye on the escalation matrix.
Lieutenant General Upendra Dwivedi, General Officer Commanding-in-Chief, Northern Command, expressed his gratitude to the distinguished speakers for crafting their thoughts after detailed analysis.
He also thanked the speakers for their valuable recommendations on the “pan-national approach” to counter current and future threats.
The army commander remarked that the conclave also intends to address issues of civil-military interdependence in decision-making, lines of effort encompassing the entire construction of DIME and the interdisciplinary response to threats.
The army commander pointed out that the “grey zone war” is underway for the northern command in J&K and Ladakh by expelling the space between peace and war, also called “no war, no of peace”, and military commanders must discern threats through thinly veiled indicators.
He stressed that there is a need to revisit technologically enabled “human resource management” to meet these future challenges. The army commander told participants that the future holds a unique challenge for all of us; and strategic calculation, cooperation and understanding among all stakeholders should be the mantra to ensure inner calm and outer peace.

2022-06-03
Previous Post: Christie will reignite at InfoComm 2022 with integrated solutions
Next Post: COVID victims deserve to be more than statistics