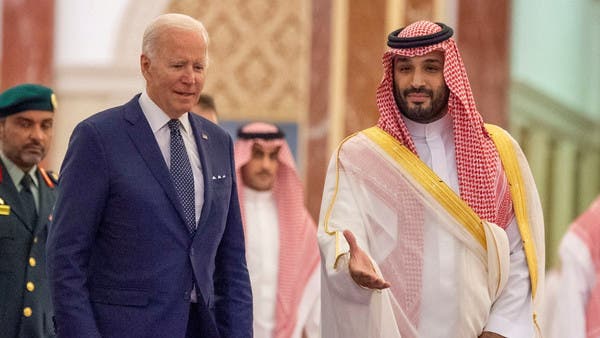 Saudi Arabia’s Crown Prince Mohammed bin Salman said what happened with Saudi citizen Jamal Khashoggi was “regrettable”, during his meeting with US President Joe Biden in the Kingdom’s port city of Jeddah on Friday.

For the latest headlines, follow our Google News channel online or through the app.

A senior Saudi official present noted that the meeting between Prince Mohammed and President Biden was scheduled for an hour and a half but lasted three and covered a wide range of issues.

The crown prince said that Saudi Arabia has undertaken all legal proceedings in the Khashoggi case, from investigations to trials, including sentencing and serving sentences.

The Kingdom also has procedures in place that prevent such errors from happening again at any time in the future.

During the meeting, the Crown Prince noted that incidents like this can happen anywhere in the world, adding that in the same year other journalists were killed in other places.

He mentioned that the United States had also made mistakes, citing Abu Ghuraib in Iraq and others as examples, according to the official.

Prince Mohammed said what is needed is for countries to address these mistakes and implement procedures that would prevent them from happening again.

During his meeting with Biden, Prince Mohammed also mentioned the murder of American journalist Shireen Abu Akleh and asked what the United States and other countries had done in this regard.

Prince Mohammed said that all countries, especially the United States and Saudi Arabia, have some values ​​they share and others they don’t, but the right values ​​and principles always affect people other countries – especially at a time when we are witnessing an unprecedented crisis. interdependence among the peoples of the world.

According to the crown prince, trying to impose these values ​​by force is counterproductive, as evidenced by Iraq and Afghanistan, where the United States has failed.

The senior Saudi official added that an entire family who were killed by a drone strike in Afghanistan in August 2021 are still awaiting justice.

Therefore, it is important to know that each country has different values ​​and should be respected, Prince Mohammed said, adding that while we assume the United States will only deal with countries that share 100% of its values and principles, then they won’t have any countries dealing with them except the NATO countries. He added that the two countries must coexist despite their differences.

China in the United States: the Middle East “is not the backyard” of any country