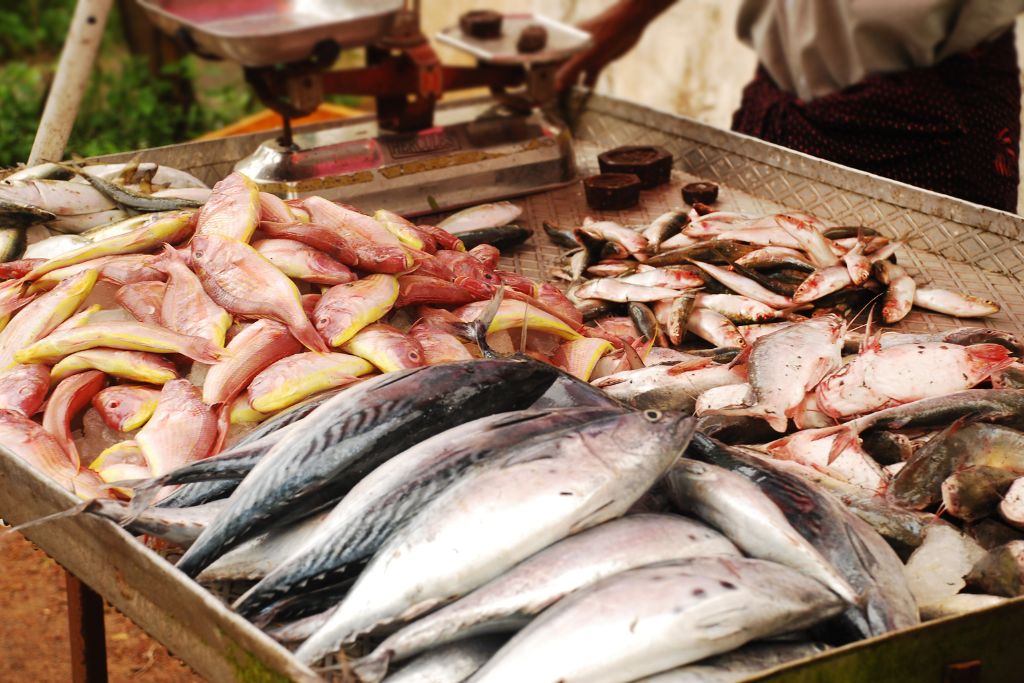 The average person eats almost double the amount of seafood than half a century ago. To meet rapidly growing demand, global fish production has quadrupled over the past 50 years. However, this has been accompanied by alarming rates of exploitation of fish stocks across the world and unsustainable levels of wild fish catches, making overfishing one of the biggest environmental problems of our time. As we reflect on the harmful effects of this practice, we explore the most effective solutions to overfishing.

Overfishing is, in a sense, a rational reaction to the growing market demand for fish. Since the 1960s, the world’s population has almost quadrupled. With it came a revolution in lifestyle and eating habits.

People are consuming more than twice as much seafood today as they were 50 years ago, with per capita aquatic food consumption rising from 9.9 kilograms on average to 20.2 kilograms in 2020.

The fish market is now valued at US$406 billion and global fisheries and aquaculture production hit a record high of 214 million metric tonnes in 2020 – according to the State of World Fisheries and Aquaculture United Nations Report 2022.

Not surprisingly, the growing demand for seafood has led to a steady decline in fish resources due to overfishing, pollution, mismanagement, and other factors. Today, less than 65% of stocks are considered to be fished at biologically sustainable levels, with the remainder classified as ‘overfished’. This meand that the stock of available fishing waters is being depleted faster than it can be replaced. The report also classifies over 57% of all stocks as “maximally sustainably fished” and only 7% of stocks as “underfished”.

On a better note, the flagship UN report found a slight improvement in the number of landings from biologically sustainable stocks, which saw a slight decrease from 2017, currently standing at 64.6%.

While these data suggest that effective fisheries management has proven effective in rebuilding stocks and increasing catches within ecosystem limits, the road to restoring ecosystems to a healthy and productive state while protecting the long-term supply of marine foods is still long.

We explore some of the best and most effective solutions to overfishing.

Subsidies for fuel, fishing gear and building new vessels notoriously encourage overfishing and are therefore a huge problem. They often benefit large fishing companies that indirectly encourage the use of fuel-intensive fishing and destructive fishing practices such as deep-sea trawling. Additionally, researchers have found that illegal, unreported, and unregulated (IUU) fishing is sometimes linked to more serious issues like human trafficking and slavery at sea.

In June 2022, the World Trade Organization (WTO) reached a landmark agreement to cut fisheries subsidies and reduce global overfishing. The landmark fisheries agreement introduces new rules to help preserve the world’s oceans, spur declining fish stocks and protect the countless communities around the world whose livelihoods depend on marine resources. The deal will see countries work together to ban subsidies to IUU fishing and restrict subsidies for stocks that are already overfished. The text allows subsidies as long as they are implemented to rebuild the fishing stock to a “biologically sustainable level” and it includes measures to strengthen transparency and accountability of governments on how they subsidize the industry .

A much-needed solution to overfishing is the adoption of rights-based fisheries management tools. According to World Wildlife (WWF), such an approach can transform global fisheries performance and help achieve a balance between economic, ecological and social needs worldwide. In short, rights-based management (RBM) authorizes an entity – such as a person, community, company or fishing vessel – to fish in a particular place at a particular time. While guaranteeing these entities a certain portion of the catch, they are also required to respect certain limits, which range from a limit on the amount of fish they can catch to specific times and seasons when fishing is permitted. .

One of the most effective policies to reduce overfishing is wrestling-share programs, which grant harvest indemnities to individuals or companies. These not only help to encourage smarter and faster fishing rather than a race to catch as many stocks as possible, but they also promote a healthy balance between the needs of people, the ocean and the economy and can ensure healthier fish populations.

By-catch refers to when unwanted marine animal species are caught in fishermen’s nets as a by-product, a practice that has increased dramatically since overfishing became such a huge problem. The gigantic nets trawled around the world’s oceans catch thousands of untargeted marine species every day, including sea turtles, birds and sharks.

To solve this problem, the Food and Agriculture Organization of the United Nations (FAO) has set up a simple solution: placing the top end of the nets two meters lower, a measure that has been shown to reduce marine mammal bycatch mortality by 98% in places like the Indian Ocean. These regulations and others aimed at preventing or discouraging bycatch will help maintain the health of the environments in which fishers work.

the Sharks and tuna is one of the most overfished marine animal species. Considered essential predators, these animals play a vital role in maintaining local ecosystems. Without them, problems like overcrowding, algae blooms, and other serious environmental issues would arise. For this reason, one of the best solutions to overfishing is to promote programs and policies that protect these vulnerable species from being caught by fishing vessels. 90% of blue sharks, for example, are mistakenly caught by fishermen every year despite having no commercial value. It is estimated that a third of shark species are threatened with extinction from overfishing, bycatch, pollution and habitat loss.

However, experts say governments around the world should do more to expand MPAs – given that 92% of the world’s oceans are still unprotected. This is arguably one of the most effective solutions to overfishing and could go a long way in addressing the IUNC recommendation protect at least 30% of the oceans by 2030.

Among the best solutions to overfishing is also the introduction of traceability standards. As highlighted in the 2022 Report on the state of world fisheries and aquaculturetraceability systems represent a crucial effort towards transparent and accountable value chains. The establishment of such standards “would make it possible to follow a product from its origin to the end market, informing on compliance with numerous fisheries regulations as well as food safety and certification requirements”.

Traceability standards have been ensured in the past through the adoption of so-called Catch Documentation Systems (CDS), the issuance of certificates and commercial documents validated by reputable national authorities to establish whether a product was of legal origin, and certifying that the catch originated in compliance with all applicable requirements. FAO has made constant efforts to help national authorities understand and implement these programmes.

7. Impose a ban on fishing in international waters

According Our world in data, 99% of international waters that do not belong to any country – also called “high seas” – are not protected. Given the effectiveness of protected waters in saving the fish population and the current lack of regulation of fishing in international waters, the introduction of a ban on fishing on the high seas would probably be a extremely effective overfishing solution. 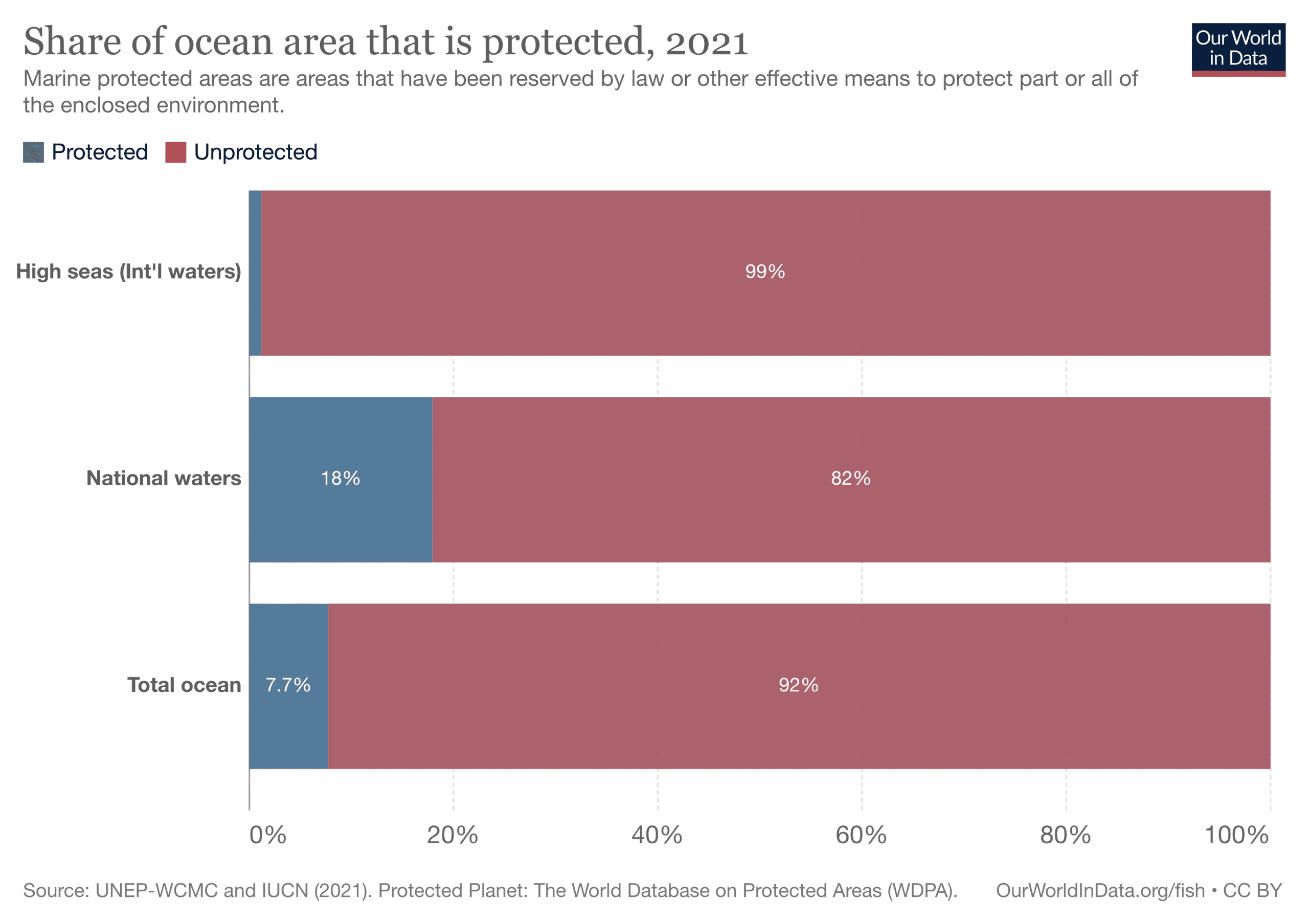 In 2017, nine countries, including Japan, China and South Korea, as well as the European Union, agreed on a historic agreement to place the Central Arctic Ocean (CAO) – an area of ​​nearly 3 million square kilometers (1.2 million square miles) – off limits to commercial fishermen for at least the next 16 years. In addition, the FAO launched the Common Oceans Programme, a plan to regulate fishing in areas beyond national jurisdiction (ABNJ), which represent 40% of the planet’s surface. The program has been successful in reducing tuna overfishing and banning fishing in extremely vulnerable areas.